What Exactly Does This Mean For The Vape Industry?

The Ireland General Election 2020 is going to have a significant impact on the e-cigarette industry in Ireland. As we already reported in our article about the National Ban on Flavoured E-liquids, the industry has seen an increased call for regulation. We at The Short Fill strongly agree that there should be regulations to every industry regardless of what the scope of the said industry is. In order to ensure that the regulations which get proposed and imposed on the industries are just – representatives of the regulatory bodies should obtain the necessary knowledge of the industry. In addition to that, they should establish a relationship with those involved in the industry in order to work hand in hand in ensuring the health and safety of consumers. Tomorrow’s General Election is said to be “a general election that looks set to shake up the country’s political landscape” (EuroNews,2020). Here is why we feel this could potentially shake up the e-cigarette industry.

Several political party representatives have already highlighted in their campaigns and debates that they are entirely against vaping. These representatives argue that the e-cigarette industry popped out of nowhere and has taken the world by storm. They are concerned about the limited research in relation to the long term health effects of vaping – arguing that there is minimal evidence which suggests that vaping is a healthier / safer alternative. In addition to that, the accusation that the e-cigarette industry has contributed towards the addiction of nicotine towards the younger generation (individuals below the age of 18+). Based on a manifesto proposed by The Irish Vape Vendors Association ( IVVA ) – we think it would be healthier if the next government were to look at and take up some of the suggestions proposed. We elaborate further below on why they should highly consider these 5 key suggestions as this will help them better regulate the e-cigarette industry while ensuring that vendors do not have their hands tied. This will allow them to tackle whatever concerns they have about the already booming e-cigarette industry.

Manifesto to the next government

On the 22nd of January, The Irish Vape Vendors Association ( IVVA ) released a General Election Manifesto (2020).

“The Irish Vape Vendors Association (IVVA) is an association that represents retailers of vaping products in Ireland who all share common goals.

We advocate for evidence-based policy on these reduced-risk products, and represent the interests of independent e-retail and retail companies.” (IVVA,2020)

In the manifesto, the IVVA proposes five key suggestions to the next government. These suggestions are to better improve the relationship between vendors/manufacturers and distributors in Ireland with the government. Thus creating the opportunity for the next ruling government to get some insight regarding the e-cigarette industry. Here are the 5 key suggestions put forward by the IVVA in the GE 2020 manifesto: 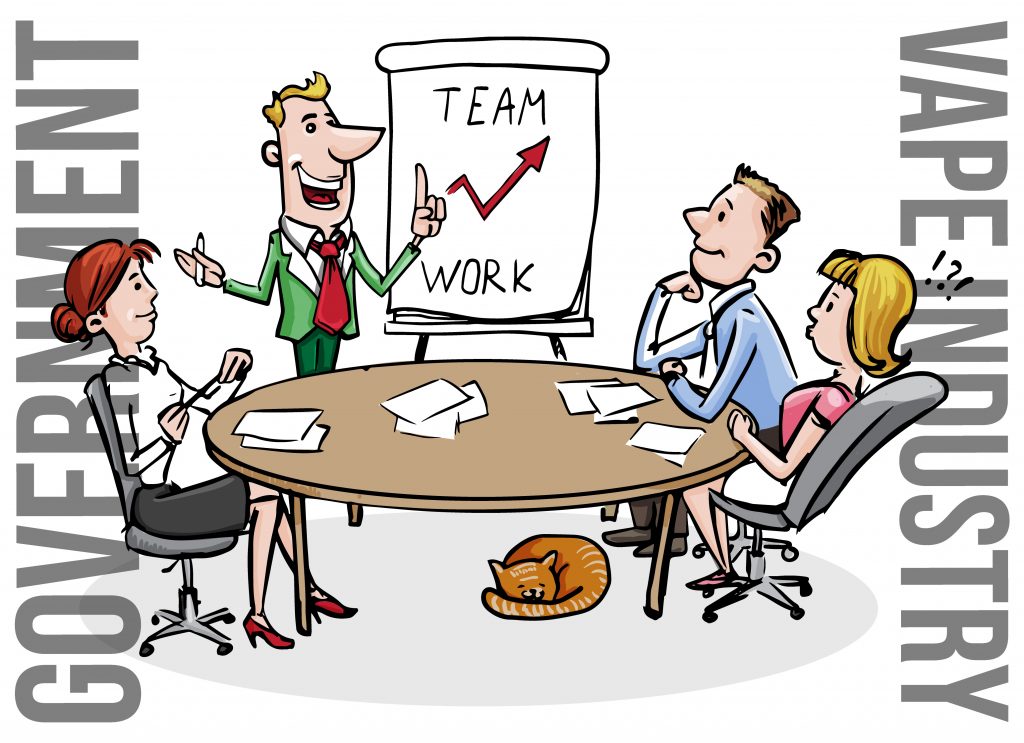 1.Engage with the independent industry & consumers

It is imperative that the regulators and government ministers who claim that the industry is “cynical for targeting kids” should spend a lot more time learning about the industry before they begin to try and regulate it. They could do so by engaging with consumers and business owners in the industry to allow us to shed some light on the industry.

2.Provide smokers with accurate information & promote vaping as a safer alternative to smoking

It is important that the industry which has proven to be a successful aid for smokers to give up smoking should be recognised and be backed by the right health authorities. This helps instil trust in users and consumers who wish to use vaping as a healthier alternative to give up smoking regular combustible tobacco. We at The Short Fill urge the respective health authorities in  Ireland to give some support towards the industry once they have carried out the necessary research which they deem fit in order to class vaping as the healthier alternative than smoking.

3.Adult choice of E-liquid flavours are important and must not be restricted

This is a very important process in assisting consumers to completely eliminate the chances of them reverting to smoking regular combustible tobacco. We strongly urge the respective authorities to respect this process and find an alternative measure to take in order to properly tackle the issue of packaging and labelling ‘being’ appealing to kids. There are much better alternatives which could be implemented in order to deal with this issue.

4.Under 18’s legislation to be made a priority

This proposal should be taken very seriously and be regulated as soon as possible. To ensure that vendors are held responsible to uphold a civic responsibility to society in preventing the addiction towards nicotine of the younger generation. Even though almost every player in the industry may abide by this rule of thumb to not sell to individuals under the legal age, there will always be that one ‘cowboy’ who will look at that as an opportunity to make a quick buck. Therefore they should be held accountable for their actions and not jeopardise the moral ethics of the entire industry.

We think this should not be imposed onto the industry. As mentioned that this is an added benefit for users to make the switch, we feel that it is imperative that this ideology of imposing additional tax towards E-cigarette products is not going to help users to make the switch to vaping. In our opinion by doing so, will be to take 5 steps back from whatever progress that the industry has made over the years.

Some Quotes From This Years Candidates On Vaping 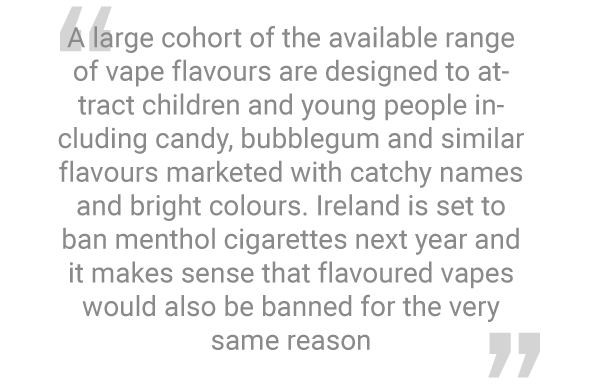 A common pattern in the formation of arguments is visible among all the individuals quoted below. The main concern that flavoured E-liquids is predominantly marketed and produced to entice the younger generation into vaping. Let’s talk about the advertising of E-cigarettes in Ireland in comparison to other countries i.e America. In Ireland, most vendors/manufacturers and distributors do abide by a certain set of guidelines in relation to advertising. Most advertising on social media platforms follows the Advertising Standard Authorities of Ireland (ASAI) guidelines. The 7th Edition of the Code of Standards for Advertising and Marketing Communications in Ireland came into effect on 1st March 2016. Under Section 17 of the ASAI code 7th Edition, it highlights the codes for advertising e-cigarette related products. To imply that the e-cigarette industry is advertising with no regulations in place is a false claim and should be revisited. It is safe to say that regulators need to get to know the industry before trying to regulate it. As passed efforts to work together with the government have failed the industries Irish Vape Vendors Association Ireland (IVVA) have called for the new ruling party to get to know the industry and propose a healthy working relationship to better improve the industry as opposed to directly drop the ban hammer as they seem fit without any internal knowledge of the industry.

It is baffling that the ministers who claim that the industry needs to be regulated are clearly unaware that there have been regulations in place since 2016. You may present the argument that the industry is constantly changing and requires statutory bylines which manufacturers/distributors or and vendors are required to abide too.